The Australia Council Awards for 2018 was an extremely successful function and from an ELISION perspective it was both wonderful and timely to be able to witness one of our family of composers, Liza Lim, honoured with the Don Banks award. The award recognised the remarkable achievements of Liza Lim and her sustained contribution to the field of composition and contemporary classical music. Read more about Liza’s work here.

And the evening also brought ELISION’s artistic director together with past chair Professor Malcolm Gillies, past Deputy-Chair Tony Grybowski for a very rare photo opportunity!

We went to see visual artist, builder and instrument maker David Murphy at his Melbourne studio.  Liza and I were seeking new and amazing versions of the home-made inventions of Walter Smetak, recently encountered by Liza in Salvador da Bahia, and used in her large-scale chamber work Ronda – The Spinning World, originally written for Ensemble Modern. This piece embodies the madcap gyrations, the ballistic energies and torque of Brazilian capoeira turned into strange asymmetrical musical repetitions and improvisational-like extremes. Here David Murphy’s creations become the Australian versions of the Três sois, and Ronda, taking the improvisational and joyous life of the Brazilian aesthetic into a sonic realm. And I am so looking forward to harpist Marshall McGuire performing upon this instrument at our Melbourne Recital Centre concert on Wednesday April 18th. Be there, the sonic adventure starts at 7:30pm. It’s the Australian premiere of Ronda – The Spinning World. 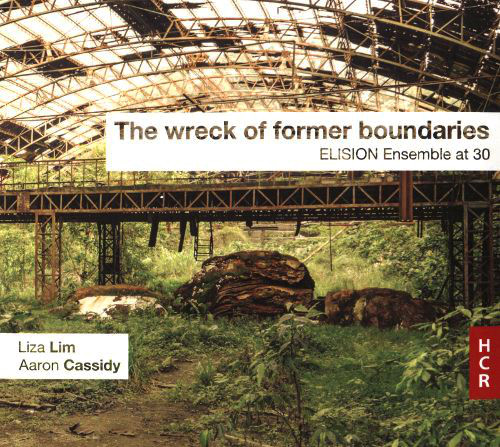 ELISION’s latest CD release The wreck of former boundaries is released today on Huddersfield Contemporary Records (HCR). This album presents major new works commissioned to celebrate the 30th anniversary of ELISION Ensemble by two composers with long-standing associations with the group, Liza Lim and Aaron Cassidy.  The performances were recorded at HCMF 2016 inside the familiar and welcome venue of St Pauls Hall, Huddersfield.  The compositions are especially intricate and detailed conceptually yet heavily immersed in the performance practice that each composer has established with the musicians of ELISION.